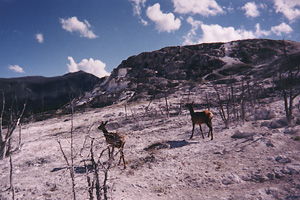 Many people believe that all wildlife flees before the flames of a fire like the animated characters in the movie “Bambi.” Contrary to this belief, scientists studying animal behavior during the 1988 burns in the Greater Yellowstone area saw no large animals fleeing the flames. Bison, elk, and other ungulates were observed grazing and resting, often 300 feet or less from burning trees.

When large animal mortality does occur, it is usually from smoke inhalation in very large, very fast-moving fires. Wildfires burning during the nesting season are most damaging. Animals with limited mobility living above ground are most vulnerable to fire-caused injury and mortality, whereas animals that live in moist habitats are least likely to be affected. Amphibians and reptiles avoid the direct effects of fire by either moving away from it or burrowing into the soil. Smaller mammals and most birds leave their habitat during a burn, to return within hours or days.

The biggest effect fire has on wildlife is the change in their habitats. Wildlife habitats, like forests, are not static; they evolve and respond to disturbances as do other natural systems. Fire changes the proportion, arrangement, and characteristic of habitats across the landscape. Immediately after a fire, there can be temporary loss of food and shelter. Animal populations may shift from species that prefer cool, moist conditions to ones that prefer warm, dry conditions. Unburned areas adjacent to burned areas supply a mosaic of habitats with a range of vegetative conditions from which wildlife can find food and cover.

Herbivores and species that prefer herbaceous vegetation for cover prefer the grass/forb habitats or broad-leafed forests that often become established after a burn. Depending on the vegetation type, burning can increase or improve forage for wildlife from a few years to as long as 100 years. In some cases, the nutritional content and digestibility of plants will temporarily increase as well. In the short term, dead wildlife becomes food for scavengers, including grizzly and black bears, coyotes, bald and golden eagles, crows, and ravens. Fire-killed trees become food for millions of insect larvae and/or snags that provide perches for raptors. Snags and downed woody debris also provide important habitat for cavity nesters, reptiles, small mammals, and even large mammals such as bears.

Wetlands are less likely to burn, and when they do, they burn less severely than upland sites. Wetlands provide a refuge from fires for many species of wildlife, and activities such as breeding by aquatic species may be carried out with little interruption. Fire in wetlands usually increases areas of open water and stimulates an increase in forage.

Invertebrate populations tend to decrease after a fire because eggs, food supplies, and/or shelter are destroyed. Flying insects are especially vulnerable because they are attracted to fire by heat or smoke and are incinerated in great numbers. Surface insect populations, such as grasshoppers, also tend to decrease. Other insect populations, especially bark beetles, increase after a fire, as trees damaged or killed provide large amounts of suitable habitat.

Knowing what species of wildlife you have in your area and what your goals are will help you plan a wildlife habitat management strategy. Riparian areas are especially critical to wildlife habitat. Cleaning debris out of water sources and vegetating the banks of streams, rivers, and ponds will help minimize erosion and also help keep water quality high and temperatures cool, which is especially important for fish.

Revegetating the site is a good place to begin. A call to your local fish and game office can provide you with a list of recommended plant materials for the wildlife habitat you wish to establish.