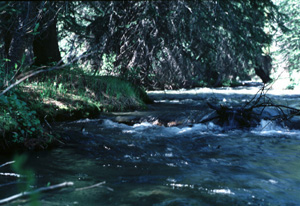 Wildfire affects streams and rivers in a multitude of ways, and the health and wealth of a stream environment are reflections of the condition of the surrounding watershed. Stream ecosystems are constantly changing and are often altered by episodic floods and droughts. Erosion is a natural process. Its effects on a stream are highly variable. Add a high-intensity wildfire, and conditions in the stream or river at the bottom of the hill can change rapidly. All of these naturally occurring events are described as pulse disturbances – with effects that are initially severe but generally short-lived. Over time, the stream environment recovers or shifts to a new and different equilibrium.

The intensity of a wildfire will have different effects on stream environments, and the five-year period after a major wildfire is one of transition. In some regions, more than 60 percent of total landscape sediment production is fire-related. Much of that sediment loss can occur the first few years after a wildfire, though in some cases, sediment accumulations may take decades or even longer to recover to pre-fire conditions.

The recovery of aquatic communities is often dependent on the presence of intact communities upstream and downstream from the burned areas. In the short term, excess fine sediment can fill in pore spaces between cobbles where fish lay their eggs and in some cases, clog and abrade fish gills and suffocate eggs and aquatic larvae living on the bottom. Live fish rapidly reoccupy fire-affected areas when their movements are not limited by barriers such as poorly designed road crossings and culverts, diversions or dams.

There can be a dramatic increase in in-stream nutrient levels the first year after a burn. Nutrients such as nitrogen, phosphorus and potassium are needed for plankton and algal growth — plants that form the food base for fish. But excess amounts of these nutrients can cause algae blooms, which, when alive, decrease light penetration and, when dead and decomposing, decrease amounts of dissolved oxygen.

Dissolved oxygen is a basic requirement for healthy aquatic ecosystems. Most fish and aquatic insects breath oxygen dissolved in the water. Water absorbs oxygen directly from the atmosphere and from plants as a result of photosynthesis. The ability of water to hold oxygen is influenced by temperature and salinity. Increasing water temperatures decreases that ability.

Temperature also governs many biochemical and physiological processes in cold-blooded aquatic organisms, and increased temperatures can increase metabolic and reproductive rates throughout the food chain. The water temperature at a particular spot is determined by the temperature of the water upstream, the amount of shade along the stream reach and the temperature of overland flow and runoff. Many aquatic species only tolerate a limited temperature range, and a shift of minimum and maximum temperatures within a stream can have critical effects on species composition.

Nutrient concentrations also can increase from the addition of large amounts of woody debris to the stream environment. Large woody debris plays a role in hydraulics, sediment routing and channel morphology of streams. It dissipates energy that is generated by flowing water and is an important component of fish habitat.

Inputs of leaf and needle litter may decline within the first five years after a wildfire if the canopy and surrounding riparian vegetation — an input that is important as both food and a source of nutrients — has been completely burned or removed. Large woody debris often increases in the short-term but generally remains stable during the first decade or more. Recruitment from dead standing wood in riparian areas is critical to maintain large in-stream wood in the long-term. If all the trees in a particular area are killed, it could take hundreds of years before the next generation of large, woody debris begins to fall into a stream channel.

In some cases, excess burnt debris may need to be removed to protect infrastructure such as culverts and bridges, but generally, post-fire woody debris should be left in the stream environment. Removal could result in changes in channel morphology, scouring of the channel bed, increases in stream flow velocities and sediment loads, an export of nutrients out of the ecosystem and a deterioration or loss of biotic habitats.