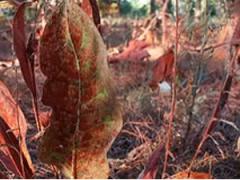 Usually seen on the evening news as red cloud being sprayed out of an airplane, fire retardants have been widely used since the late 1950s and are extremely helpful in suppressing wildfire.

There are three classes of fire retardants. Long-term retardants are usually applied with a rotary or fixed-winged aircraft. They are 85 percent water, with 10 percent fertilizer and 5 percent coloring, usually iron oxide. The retardant is dyed for higher visibility over the drop zone. Long-term retardants can usually be removed with plain water but if dried, may require the use of a power washer. The iron oxide coloring can penetrate some materials and be difficult to remove, requiring additional solvents.

Foams are typically applied with ground equipment. Foams are mostly uncolored, concentrated dish detergents and are 99 percent water, 1 percent surfactant, foaming agents, corrosion agents and dispersants. They can be removed by thoroughly rinsing the area with water.

Gels also are typically applied from the ground. They consist of 95 percent to 98 percent water and 2 percent to 5 percent thickeners and stabilizers. They come in two forms that can be identified by color:

At no time should chlorine bleach, or bleach-based products be used to clean up any type of retardant, as this could produce harmful and explosive gases. As retardant products are mostly water, they will eventually evaporate. The remaining ingredients can cause eye irritation and cuts, scratches, or chapped skin to sting. Clean up of interior spaces should be done by professionals trained in fire restoration work.

The average pH of a long-term, aerially applied retardant is 5.5 to 7.5. Because of this and the high concentrations of nutrients that make up the products, landscape plants coated with fire retardant should be washed as soon as possible to prevent foliage from being burned.

Although modern retardants are not considered toxic, it is a good idea to avoid making puddles when cleaning so that pets and wildlife do not ingest this material. Pets should be shampooed to remove any material that is on them, although the main effect is just a temporary drying of skin.