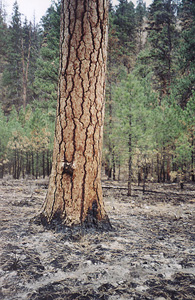 Predicting the mortality of conifers after a wildfire is important for post-fire planning and management. Fire resistance varies greatly with plant species and factors such as age. In general, young, fast-growing trees on good sites will be better able to withstand damage from fire than over-mature, slow-growing trees on poor sites.

Additional general statements that hold true across species are: 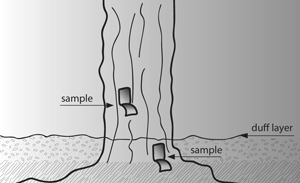 Figure 1. Assessing cambium damage on conifers after a wildfire.

Gathering information on mortality and assessing the percent of live trees that will die from secondary effects such as bark beetle invasion, fungal infections, and/or a decline in wood quality is important for planning post-fire management activities. There are so many variables involved in assessing post-fire tree mortality that it is impossible to apply a formula or standard set of characteristics, making this process more of an art than a science. You will get the most accurate results by using a combination of methods.

Tables for estimating the probability of fire-induced mortality for specific tree species can be found in the linked articles listed below.

For more in-depth information go to After the Burn: Assessing and Managing Your Forestland After a Wildfire. University of Idaho Extension, SB 78, Idaho Forest, Wildlife and Range Experiment Station, Moscow, ID.