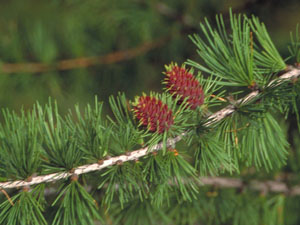 Western larch, also called tamarack, is the largest of the American larches and is one of the few deciduous conifers. Occurring only in the Upper Columbia River Basin of North America, western larch can reach heights of 150-175 feet and commonly live to be hundreds of years old.

Long-lived and with few serious natural enemies, western larch is able to persist in forest stands until fire creates openings and new seedbeds, giving seedlings the opportunity to quickly occupy the site and grow rapidly.

Western larch has thick bark with little resin content – at ground level the bark is often six inches thick on mature trees. This, combined with high, open canopies of low flammability foliage, a tolerance for defoliation, and deep root systems commonly ranks mature western larch as the most fire resistant conifer in the Northern Rockies.

Mortality in conifers is greatly dependent on the duration of the fire as well as the thickness of the bark and the percent of canopy scorched. Western larch, with its three to six inch bark, survives most fires. Pole-sized trees, however, are able to only withstand low to moderate burns and seedlings and saplings are readily killed by fire.

Western larch has a better than average chance of individual trees surviving even the largest and most severe of fires. Post-fire, these survivors become seed trees and, when fires precede a good seed crop, provide rapid restocking on newly burned seedbeds.

There is no formula or standard set of characteristic to determine if a fire damaged tree will survive or not. Many variables, including site conditions, stand health, and fire intensity, play a role in the survival of individual trees. You can use the criteria below to give you a probability of mortality for individual trees.

2. Estimate how much of the crown is scorched for an individual tree. Using Table 1 (below), determine the probability of fire-induced mortality for western larch. If the percent of crown scorch volume is in the white area, that gives the tree a 50% chance or greater of survival; if it is in the black, there is a 50% or greater chance of mortality. 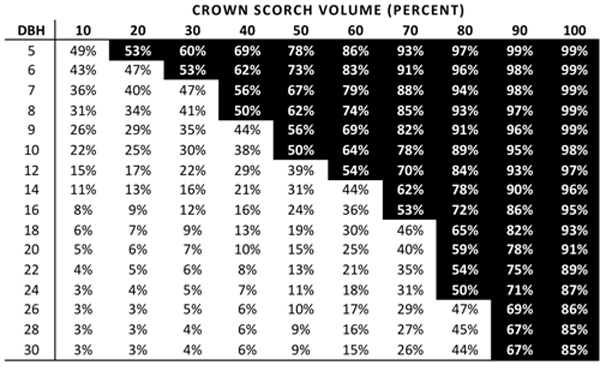 Sources/Notes: Table developed by David C. Powell, Forest Silviculturist, Umatilla National Forest, Pendleton, OR. These values are probabilities, expressed as a percent, of western larches of various diameters being killed by fire. They are based on an equation from Reinhardt and Ryan (1989) and a bark thickness factor from Keane et al. (1989). See Steele et al. (1996) for a description of the calculation methodology. White values on a black background denote combinations of crown scorch and DBH with a mortality probability ≥ 50%.