Ponderosa pine is a large tree, growing to 180 feet in height and three to four feet in diameter and has several common names. Young, vigorously growing ponderosa pines are often called bull or blackjack pines and have dense crowns of deep green foliage and dark brown to black bark. Slower growing, older trees that have developed the characteristic yellow-green foliage and yellow-brown to cinnamon-red platy bark of a mature ponderosa pine are often called yellow pines.

Thick, nonflammable, exfoliating bark insulates the cambium of ponderosa pines from heat. The depth of this protective bark increases with age and can reach three-plus inches on older trees. Additional adaptations such as: deep root systems with a large taproot; self-pruning lower branches, resulting in high crowns; loosely arranged, long-needles which produce an open structured crown; a high foliar moisture content of live needles; and large buds enclosed in thin, insulating bud scales all contribute to the fire resistance of ponderosa pines.

Though fairly fire resistant, there are conditions that will make ponderosa pine as susceptible to mortality by wildfire as any species of tree. For example, densely grown trees will tend to have thinner bark and be less hardy than open grown trees. Low-intensity fires readily kill seedlings less than 12 inches in height, while larger seedlings, saplings, and pole-sized trees may be damaged but not killed, especially if the burn occurred during the dormant season. Trees larger than pole-size are quite resistant to low intensity burns.

Stressed trees are more susceptible to mortality after a wildfire than healthy, vigor trees. Stressed trees often produce large cone crops, called stress crops. For trees trying to survive a wildfire, a heavy cone crop increases the chance of mortality as the energy and nutrients that could have been used to recover from the burn have been diverted to cone development and maturation instead.

Cambial damage is most likely to occur when high-intensity fires are maintained by deep duff layers surrounding the base of trees of any age. Extensive foliar scorching can occur with only light damage to buds, with some trees able to withstand up to 90 percent crown scorch as long as 50 percent of buds and twigs survive. Damage to the cambium is the most important indicator of mortality in small diameter classes of ponderosa pine while crown damage is more important in pole-sized and larger trees. The cambium must be completely girdled to kill the tree and trees that only are partially girdled have a good chance of survival. Bark charring is a poor indicator of cambium damage in ponderosa pine.

Post-fire regeneration in ponderosa pine is exclusively through seed. Even though trees with scorched foliage may not live long, they serve as important seed sources. Fire creates a favorable seedbed for this species by removing competing vegetation and exposing bare mineral soil. Seedling establishment is best when a good seed crop coincides with above average rainfall, and when combined with a post-fire release of nutrients (primarily nitrogen), contributes to successful regeneration.

There is no formula or standard set of characteristic to determine if a fire damaged tree will survive or not. Many variables, including site condition, health of individual trees, and fire intensity, play a role in the survival of individual trees. You can use the criteria below to give you a probability of mortality for individual trees.

1. Determine the condition of the cambium at the trunk, roots and root collar. Do this by pealing back a section of the bark in four places, near the base around the trunk and under the duff layer (if significant burning occurred at the base of the tree) and examining the cambium layer below. If :

2. Estimate how much of the crown is scorched for an individual tree. Using Table 1 (below), determine the probability of fire-induced mortality for ponderosa pine. If the percent of crown scorch volume is in the white area, that gives the tree a 50% chance or greater of survival; if it is in the black, there is a 50% or greater chance of mortality. 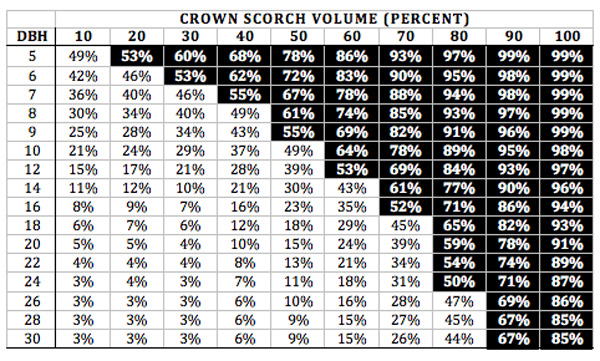 Sources/Notes: Table developed by David C. Powell, Forest Silviculturist, Umatilla National Forest, Pendleton, OR. These values are probabilities, expressed as a percent, of ponderosa pines of various diameters being killed by fire. They are based on an equation from Reinhardt and Ryan (1989) and a bark thickness factor from Keane et al. (1989). See Steele et al. (1996) for a description of the calculation methodology. White values on a black background denote combinations of crown scorch and DBH with a mortality probability ≥ 50%.