Oil-based penetrating stains are often recommended as one of a number of maintenance procedures to extend the useful life of a wood deck. Stains can reduce the amount of water taken up by the wood when wetted, the associated changes in dimension, and the amount of erosion that can result from exposure to sun, rain and wind. Stains can also contain a fungicide to help control mold growth on deck surfaces. Penetrating stains aren’t effective for more than a year or two, so reapplication should occur on a regular basis to capitalize on the benefit of a penetrating stain. Those individuals concerned about wildfires worry that these oil-based stains would have a negative impact on the fire performance of the deck.

To investigate this, stained and unstained redwood decks were incorporated into fire demonstrations held during two wildfire workshops. An oil-based stain was applied to a small redwood deck which had been stored outside for about a year. In each case, the stain was applied within 24 hours of the demonstration. The volatile components of the stain will dissipate relatively quickly, so conducting the test on freshly stained material was thought to be the most severe condition.

As seen in the following photographs, the oil-based stain had minimal impact on the performance of the deck boards. 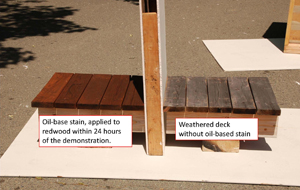 Before the fire demonstration, with the stained deck shown on the left and unstained deck on the right.

A burning brand made up of three-fourths-inch square wood sticks, each 6 inches long, nailed together in three layers, was placed in the top of each deck. The middle layer of the brand was positioned perpendicular to the top and bottom layers. 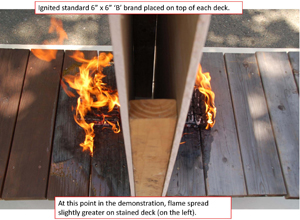 After the burning brands have been placed on the decks. 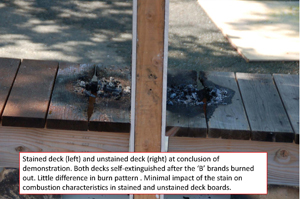 After the brands have burned out.

The burned areas on the decks are about the same size, and neither deck continued to burn after the brands burned out, indicating minimal impact of the stain on the burning characteristics of the deck boards. These results indicate that proper maintenance of wood decks with penetrating oil-based finishes will not contribute to a higher fire hazard.[[