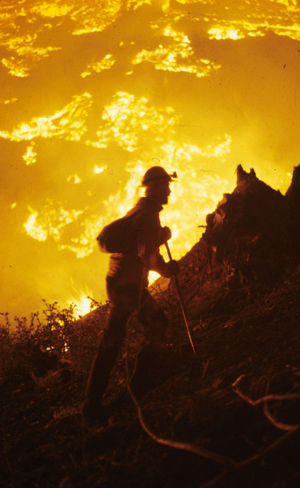 Firefighters’ ability to protect people and their property in wildfires depends on the intensity of fires they face. When homes and businesses are surrounded by landscapes that ignite easily and burn very hot, firefighters and homeowners cannot survive the heat released and must pull back or suffer serious injury or death. If whole neighborhoods are built in highly flammable landscapes and the vegetation has not been maintained to burn with low intensity, residents may find they cannot escape and firefighters may not be able to get to threatened or burning buildings without high risk of injury or death.

Wildfires usually threaten whole neighborhoods at the same time. Especially early in a fire, firefighters may need to depend only on nearby crews, engines and other assets that can arrive quickly. Even if only a small neighborhood of fewer than 100 homes is threatened, it is unlikely that the local fire department has enough people and engines to dedicate one engine to every one or two homes. When firefighters and equipment must be dedicated to structure protection, they are not available to attack the fire itself, allowing the fire to spread more than it would otherwise. As the fire spreads, it threatens even more homes and other values at-risk, requiring more personnel and equipment. Taxpayers may be unwilling to support their own fire departments with enough equipment and personnel to defend whole neighborhoods against an advancing wildfire. During those first hours or days that it takes to bring enough engines to the fire from distant firefighting cooperators, public safety and property are best protected by making landscapes less likely to burn with high intensity and buildings less likely to ignite from embers, radiant heat and direct flame contact.

Firefighters often have to operate with fewer resources than are necessary to fight a wildfire. While fire-fighting agencies rely on taxes to provide the necessary resources such as fire trucks, planes and personnel, funding provided is often insufficient to battle all fires effectively. Saving lives is a No. 1 priority for firefighters, but they also run the risk of losing their own lives. When a homeowner creates defensible space around his or her home and takes measures to retrofit the home with ignition resistant features, he is are effectively helping, not just those individuals fighting the fire, but also reducing the risk of losing his own home as well as his neighbors’.