Embers are the leading cause of home loss during wildfire. Embers are burning pieces of vegetation or construction materials that can be lofted high into the air, carried by wind, or transported by fire whirls.

Experts from eXtension.org advise homeowners to create defenses against wildfires by starting with the house and then working out from the structure. Homeowners don’t need to be overwhelmed, but the wildfire that killed 19 Arizona firefighters and destroyed more than 100 structures is probably part of a long year of wildfires, the experts say.

“People can make a difference in the initial construction of new homes and retrofitting existing homes,” says Glenn Nader, livestock and natural resources advisor, University of California Extension in Sutter, Yuba and Butte counties. He cites two critical areas of home construction to increase fire resistance – the roof and vents. “Not every house will see direct flames, but they will have embers that can travel up to three miles ahead of a fire. The roof is a huge receptor for embers,” Nader explains.

Stephen Quarles, senior scientist with the Insurance Institute for Business & Home Safety, says a Class A fire rated roof covering can reduce wildland fire risk dramatically. He also stresses the importance of removing leaves, needles, twigs and other debris from the roof and gutters so the protection offered by a fire-rated roof won’t be compromised in locations where the roof is adjacent to other materials, such as at the siding of a dormer.

Proper screening over vents is important because embers can enter through these openings and ignite combustible materials inside the building. That is why stucco homes with tile roofs can catch on fire. “Vents in the blocking of open-eave construction are more vulnerable to ember entry than those located in soffited eaves. Similarly, gable end and similar vents are also vulnerable to the entry of embers,” says Quarles. He recommends that one-eighth inch mesh galvanized metal screens cover all vents.

Area around a house is another area of concern

“A defensible space helps your home better withstand a wildfire. Firefighters may be reluctant to defend your home if the landscape doesn’t give them a fighting chance”, says Michael Kuhns, Utah State University Extension forestry specialist. “And firefighters think about exit routes from a safety perspective – is there more than one way out? Is there a long road to the home?”

The area within five feet of the house is particularly important – this zone is often referred to as the “noncombustible zone.” To help the house survive, embers landing near the home need to land on noncombustible materials. For example, certain plants such as junipers, ignite quickly; a better choice would be high moisture plants such as succulents, in addition to non-vegetative cover such as rock gardens, pavers or cement. It also is important to break up the fuel sources by keeping space between plants, cleaning out dead material and pruning trees so ground fire can’t easily get into the tree canopy. Decks and combustible fencing that attach to the house are also vulnerable. Do not store combustible materials under decks. 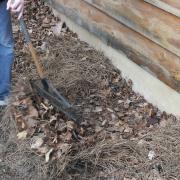 Remove plant debris, such as pine needles, leaves, branches and bark, from the base of the house, under the deck and on the roof. All of these materials act as fuel for wildfires.

Resources to prepare for wildfires

Homeowners need to be vigilant as the intensity of wildfires increase because: 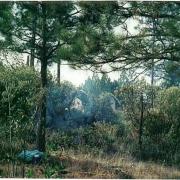 A home before creating a defensible space around it, above, and after the homeowner created a space more likely to protect the home during a wildfire, below. 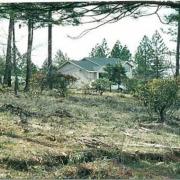 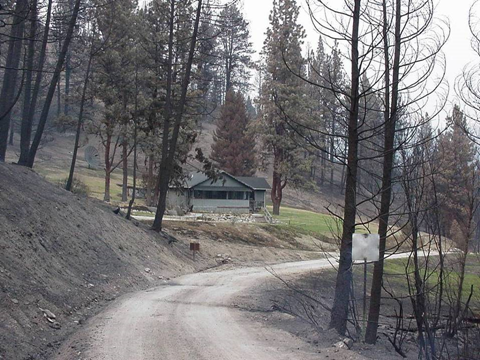 Goal accomplished: the home stands after the wildfire moves through. 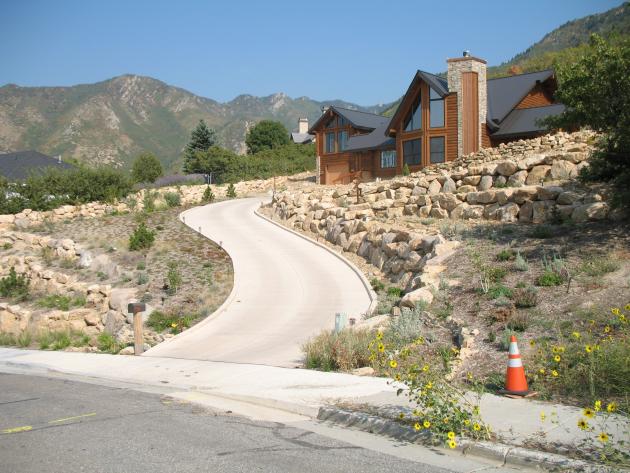 Firescaping is landscape design that reduces the vulnerability of the house and property to wildfire. The goal is to develop a landscape with a design and choice of plants that offer the best defensible, survivable space and enhance the property.