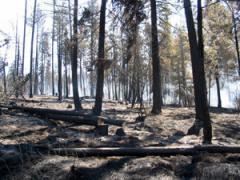 Assessing the erosion potential after a wildfire is an important step of post-fire management. Erosion is a natural process occurring on landscapes at different rates and scales, depending on geology, topography, vegetation, climate and weather, and is defined as the movement of individual soil particles by wind or water. Erosion is a function of the forces available, the amount of protection to the soil surface, the type of the soil and soil stabilizing components such as roots. It is usually described by three components: detachment, transport, and deposition.

The amount of erosion after a burn will be dependent on the magnitude and timing of each storm event, the severity of the burn, the slope, soil type and condition of the watershed before the burn. Erosion may be fast or may continue to occur over several years after a burn as the root systems of burnt vegetation decay, further decreasing soil stability. Types of erosion include:

A common initial concern after a wildfire is erosion and flooding. Some soils are more erodible than others. Post fire erosion rates will be dependent on a number of factors, some measurable (percent slope) or known (soil type), some that can be estimated (burn severity), some that we have control over (vegetative cover) and others we do not have control over (post fire weather patterns).

In general, erosion hazard will increase as slope increases and vegetative cover decreases. To be safe, assume that all drainages in steep, hilly areas are capable of carrying debris flows and are especially vulnerable after a wildfire. Areas burned at moderate to high severity are of greatest concern due to lack of cover and the development of water repellent layers. Note unique unit features such as draws and rocky outcrops. Even areas with low erosion hazard ratings can experience rill and gully erosion if denuded of vegetation and challenged with a short duration, high intensity storm event.

For more information on assessing your erosion potential after a wildfire, go to After the Burn: Assessing and Managing Your Forestland after a Wildfire (pgs.24-25).

For recommendations on erosion control, go to After the Burn: Assessing and Managing Your Forestland after a Wildfire (Appendix II – Erosion Control pgs.62-74).