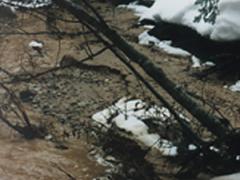 Erosion is probably one of the most common concerns after a wildfire. Post-fire erosion depends on many factors, but generally erosion hazard increases as slope increases and vegetative cover decreases. To be safe, assume all drainages in steep hilly areas can carry debris flows and that they are vulnerable after a wildfire.

Erosion is a natural process. The amount of erosion after a burn depends on storm events, burn severity, slope, soil type, and the condition of the post-fire watershed. Erosion may be immediate and can continue over several years as root systems of burnt vegetation decay.

Surface erosion is when individual soil particles move, usually by water flowing over exposed soil. Debris flows and avalanches are dramatic forms of erosion and can deliver huge amounts of sediment and debris downslope.

If you live on or near a slope, in a draw or ravine, or along a stream or river, you need to be aware of the extent of wildfire damage upslope or upstream. If most or all of the vegetation has been burned off of these areas, the chance for erosion is significantly greater and can result in mass movements of soil and water downhill or downstream from the damaged areas.

Erosion control is one of the most common rehabilitation activities after a burn. There are several common methods of controlling erosion.

Mulch covers the soil, reducing rain drop impact, overland flow, and soil particle movement and offsets the effects of water-repellent soils. Mulching is the only treatment that consistently and significantly reduces erosion rates by immediately increasing the percentage of ground cover. Types of mulch include certified weed-free straw, slash, and geotextile fabrics.

Grass seeding is the most commonly used erosion control treatment after a burn. Grass is seeded to burned sites from the ground or by air to increase vegetative cover during the first few critical years after a fire.

For information on how to choose and install erosion control methods after a wildfire, go to: http://www.cnr.uidaho.edu/extforest/AftertheBurnFINAL.pdf and see page 64.